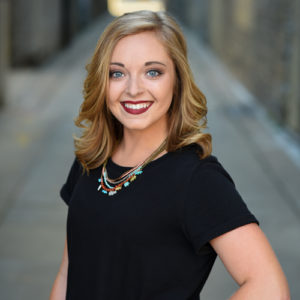 Abi is originally from Waterloo, Iowa. She has been dancing for nearly 20 years, six of which were competitive. She began dancing at Fusion Dance and Fitness in Waterloo, where she trained in various styles including ballet, contemporary, hip-hop, jazz, and lyrical. During that time, she also attended UDA Dance Camps, the Ann Lacy School of Dance in Oklahoma, and intensives including NUVO and The PULSE. She made four IHSA State Dance appearances in hip-hop, jazz, and pom.

In 2014, Abi moved to Minnesota to pursue a degree in marketing at St. Cloud State University. She competed for 3rd place in Pom and 4th place in Jazz in the Open category as a member of the SCSU dance team that year. She also founded a hip-hop dance club called H2Crew, and served as the Creative Director for three years. She directed two shows and a cover music video for the club.

While living in St. Cloud, she discovered her love of teaching dance at Ms. Melinda’s Dance Studio. She taught there for four years, working with dancers of all ages. She specialized in hip-hop but also taught classes in ballet, contemporary, jazz, and lyrical. Her dances and choreography placed 1st and won awards at competitions such as BravO!, Midwest Starz, Nexstar, and Starpower. Her unique flare and passion for students allows her to push dancers to work hard and reach new heights.