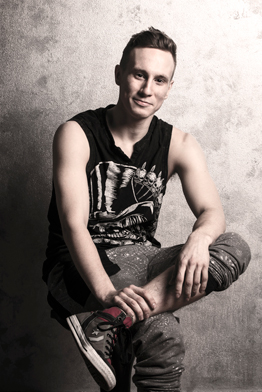 Christian was a late bloomer in dance, staring at 19 years of age. He studied ballet for 3 years at River Valley Dance Academy and Zenon School of Dance. During this time Christian attended college at North Central University where he studied modern dance as well as a multitude of other styles. He also branched out in his studies at Zenon and began studying Jazz, Contemporary, Hiphop, and improv theory. Christian was afforded the opportunity to start studying along side St. Paul Ballet’s professional company in their morning technique classes, and his training even allowed him to take some classes in New York City and Los Angles, California.

In addition to dancing himself, Christian became an award winning dance photographer and has been hired by many companies, studios and dancers all across the United States.

Christian was hired at The Awakening School of Dance and Gymnastics in 2014. He taught a variety of classes including acrobatics, leaps and turns, ballet technique, as well as cleaning solos for a multiple competition studios. He was also given the opportunity to start choreographing a solo for Larkin dance studio. Christian was hand selected to teach strength and flexibility for the LOVE NO HATE Dance Convention in New York City, and was hired to teach workshops all over Minnesota, as well as Chicago.

In 2016, Christian was hired by Northland School of Dance and St. Cloud School of Dance and Gymnastics. He is continuing his training with St. Paul Ballet and Zenon school of dance, and will be choreographing for, and working as a photographer for, multiple competition studios.